Let's Chat About Elizabeth, the surrounds and a favorite condo...Laureldale

Condominiums fall into a wide range as well. Off 7th on Clement there is a wonderful historic home that has been converted to condos, Alexander House. This occurrence runs throughout Charlotte especially in the older areas. Years ago one very progressive real estate broker converted several of the big mansions in Myers Park to condos. I always think of her as visionary. And part of me believes we will see that happen again as the population ages and the luster of the large old homes and new large homes become passé.
Favorites: In Myers Park fringe area: Boxwood by Brian Speas, the gentleman builder who builds a superior product always and generally in Myers Park, Eastover, Barclay Downs, Park Road and some infill around Freedom Park. An oldie, Queens Mark, also that same fringe area, the first new wave of lofts, Elizabeth Lofts, and one of my very favorite favorites, Elizabeth on the Park
overlooking Independence Park, and pictured here, Laureldale. Once apartments, the setting is between Randolph and Fifth, lovely brick buildings, a pretty quad, central laundry ( a telltale sign of  apartment conversion in that era) Alson Court across Randolph is in Eastover. Once apartments and converted, Alson is a grand old building with one bedroom, two bedroom and three bedroom units, a handful of garages, built like Fort Knox.
Laureldale’s  neighbor, The Grove, is a handsome renovation of old apartments. Density reigns approaching Hawthorne as it crosses 74 with Hawthorne Bridge, Elizabeth Village et al. A wonderful conversion, The Rutzler, 1920, renovated in 2005 has a new apartment building as its neighbor, at Louise and Central.
********************
I have been thinking about how to illustrate the variety of condominiums in any given area. Maybe I will make a chart so we can look at their differences even though they all post a prime location. It is a game I play with myself, CondoCanDo!
The location is Randolph Road at Sharon Amity, Cotswold.

Charlotte is on the rise. Towers uptown are on the rise. Apartment projects proliferate the corners on our main thoroughfares as we wait for the surge of the Millennial Generation. First the apartments, then the conversions, then the lines blur and maybe we stop to wonder what happened. Because we are no stranger to being the Belle of the Ball. We are
a city of the New South and we are a city of folks who tear down the old for the
promise of newer and better and greater.
Until there is a whiff of maybe not...
So, to ease my wondering about the cadres of investors who boast the building of apartment buildings with not just twenty or thirty apartments but hundreds, I wander around in the Charlotte I know so well. Through the sparkle of new and tall and lean and open, I wind my way to Historic Fourth Ward to one of my most favorite condominiums, The Poplar.
Like a grand dame she reposes on the fringe, too taken with her rose garden, her lovely, petite roof top, garnering a nice pleasant view of the skyline, this  city of the New South, as she gazes down on historic homes and the narrow streets with large trees.
I was a student of The Poplar long ago in the 80's. Max The Wonder Dog and I were taking pictures uptown on a Sunday morning, a young couple stopped to speak to Max, a handsome tawny Briard. They saw our license tag, "RE LADY", and asked if I were a realtor? They were looking for a condo uptown. Max got credit for the sale. I made new friends and discovered the inside workings of The Poplar.
Poplar and Tenth in  Historic Fourth Ward 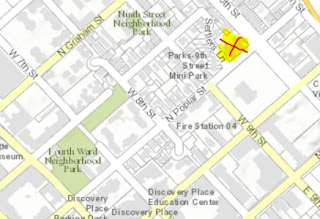 Every once in a while, I like to visit to see how much I remember and to make new discoveries like the elevators fore and aft. The second I step foot in the lobby I am whisked away to New York City. The Poplar has that kind of ambiance. Is it NYC or Europe?
Hardwood floors throughout, some condo homes large and spacious with fabulous light from the old glass carefully hung in metal casings, taller ceilings and an aura of having lived many lives, these spaces whose stories include lauded musicians and artists
and people of creative bent.

And this then begs the question? Older or newer?

Next , Condo CanDo® and I take a walk through Elizabeth.
Elizabeth is a Nationally recognized historic neighborhood.
As is Myers Park.